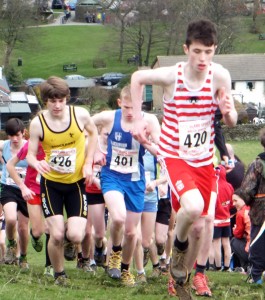 The Junior English Fell Running Championship got under way for 2012 with the first race taking place at Pendle. Being a championship race runners were not disappointed with the race being a tough test of their ability, with a short steep uphill start before a long gradual climb takes the runners onto the steep open fell of Pendle Hill for the older age categories.

The U12 race saw Ralph Boggis, Nathan Sharkey and Gemma Johnson all running for Calder Valley juniors as well as Isaac Mitchell and Callum Mawby who were both taking part in their first ever fell race having joined and trained hard over the winter All five found the going tough and the competition tougher however they all are in the first year in this age group and having run well will continue to improve as the championship develops. With non of our U14 making the trip it came to the turn of the U16. Edan Whitelaw having just stepped up from the younger age group this year had a great race and apart from the run away winner he was always in contention with a group of runners finishing in 6th place and given the same time as the runner ahead and just 6 secs behind 4th place. Molly Jagger continues to improve and is enjoying running in the red and white hoops of Calder as she finished 8th.

However the best was still to come, Brad Traviss who is this year competing in the tough U18 age group had to contend with being part of the senior race which follows a really tough course across and up and over Pendle Hill climbing to its full height of 1500 feet in a around 4.5 miles. He made the best start to the championships possible by claiming victory beating his closest rival by over 1 min and also finishing 9th overall in the senior race.

The English championship continues in 2 weeks time with the second race being a tough Lakeland race.

Our juniors in action – photo courtesy of Dave Woodhead

Its never very warm up at Penistone Country park at Haworth but last Tuesday sleet, strong winds and subsequent snowfall were perhaps the worst conditions for a long while to greet the happy little bunnies who were racing in the first Bunny Run of the 3 race series. Our juniors did themselves credit with Brad Traviss finishing 6th in a time of 16 mins 12 sec for the 3 mile route, he was followed in by Edan Whitelaw in 18th place in a time of 17 mins 35 sec. Mollie Jagger and Issy Wharton battled it out as well before Mollie just edged it in 23 min 06 secs and beating Issy who finished in 23 mins 47 secs.

Hopefully next weeks weather will be much more seasonal and will attract a few more of our juniors out to have a go at these Bunny Runs as there are 2 left before we get to the craziness that is the Bunny Relays.