The beautiful, tranquill setting of Hawkswick in Littondale in the Yorkshire Dales wasn’t so quiet when the young fell runners of the future descended to run in their next championship race. This was also a Yorkshire Championships race. 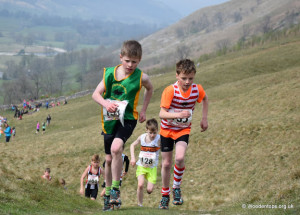 He’s Yorkshire Gold is bright young star Patrick Casey taking 1st place in the under 10s showing that he is one of the best for his age in the country in a time of 8mins 18secs. Charlie Pickens also sneaked into the top 10 with a fine performance to take 9th pace in 9mins exactly. Good runs also from George McFie in 15th only 15seconds behind Charlie. You’ll get him next time George!!!. 44th place was Tom Owen 10mins 50secs, 47th and 9th girl Matilda Baldaro 10mins 39secs, 51st and 12th girls and only 11 seconds behind Matilda wasFearne Hanson and 55th place Ben Hodgkinson 11mins 4secs. The hotly contested under 12s saw excellent runs with kids pushing each other all the way for maximum club champs points. James Duffy took the points, in a time of 12mins 30secs, placing 13th overall on the day. He was closely followed by Jude Baldaro just 6 secs behind placing 15th overall. Just 6 seconds later there was a right battle with William Hall (17th place) just edging out Eilo Beesley (18th place) with 4 seconds separating them. And even closer titanic battle between Joseph Hobbs (22nd place) and Alex Duffield (23rd place) saw only 2 seconds separate them as they crossed the finish line in 13mins and 13mins 2secs respectively. Leading the girls home was Beth Blacker who was 10th girl and 53rd on the day in 14mins 46 secs. 20th girls home was Maya Brunt who placed 67th overall in a time of 15mins 29 secs closely followed by team mate Ruby McFie in 79th overall in a time of 16 mins 59secs. Lucas Greenwood who is making great improvements was the only one in the under 14s race placing 55th in a time of 14mins 49 secs. One of best runs of the day came from Jack Denton who is making a comeback onto the fell scene after injury problems. Looks like that dodgy ankle did ok on the day as he was an excellent 5th place overall in the under 18s and 3rd Yorkshire lad back he earned himself a bronze medal. Well done to all who raced. You are all stars.