Ten years ago on the 27th June back in 2006 Calder Valley Fell runners junior section came into existence. Largely it was the response by one parent to their sons weekly pleas of “when are they starting a junior club dad” that lead to 4 young lads and three willing adults being there at the very first training session. From small seeds grow big things and over the proceeding 10 years since that first session well over 500 children have been passed through of the club. Some have come and gone others have stuck with it but one thing is for sure everyone of them has had fun running on the local hills around Mytholmroyd.

So with that kind of history Calder Valley weren’t going to let the 10th anniversary go by without marking it in some way. And what better way than to organise a 10 mile run.

The run was to be a social affair with old and young alike with present day members and runners from over the years taking part. 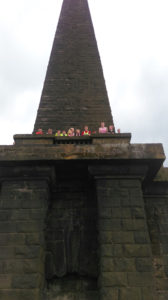 So at 9.30 on Sun 26th June over 50 runners set off from Mytholmroyd Community Centre car park heading for Stoodley Pike. The weather wasn’t sure what it was going to do but as the runners returned over Erringden Moor it made its mind up and the sun came out to shine on the day. Once off the moor the group headed back to Mytholmroyd to cross the valley bottom at Hawksclough Bridge. However before setting off on the second half of the route the group were treated to home made cakes and biscuits on the bridge made by non running parents. This watering stop made an ideal point for some runners to leave the birthday celebration and for others to join in. After properly refuelling the second climb of 1000 feet of the day began as the route took the club through Red Acre Woods – the scene of the first ever session 10 years previously, up past the golf course above Heights Road around part of the Calderdale Way before running back along the skyline to the Sheepstones Trig point, where the group enjoyed a wonderful laid out picnic again provided by and carried up by more parents.

After this all that was left to do was to run the final downhill mile back into Mytholmroyd and to warm applause from waiting parents back at the start some 3 hours after setting off.

It was a great way to mark a big birthday. Here’s to many more years of junior fun and success. We might just have to do the whole thing again in another 10 years time.

Parents and juniors alike thought it would be a fitting tribute to Alistair Whitelaw for all his hard work over the last 10 years. He’s helped kids to enjoy the delights of the fells and this in turn has helped many of them grown in confidence. Al was presented with a book which had photos and comments from lots of the juniors on why they love fell running so much. He also received some sports vouchers to go and treat himself to something nice.